The Bekirr are a humanoid species native to the Gamma Quadrant. They are ruthless isolationists whom the Cardassians attempted on numerous occasions to form relations with, however, all attempts at doing so were rebuffed and destroyed. Coincidently, Bekirr is also the name of a reclusive badger like animal native to Cardassia.

The Bekirr are a humanoid species that have a resemblance to reptiles with large eyes. Not much is known about their society or biology except that they were a very cold race and spoke in a near machine-like voice. The Bekirr wear a form of armour and black shaped helmets. There seemed to be two classes of Bekirr within their military namely the standard rank and file warrior as well as an officer class who were inquisitors.

The Bekirr are quite an advanced species that were unique in that they used projectile weaponry against their enemies which consisted of equivalent of such devices in the form of rifles, pistols and on one occasion fired a form of rocket launcher. They launched powerful torpedoes as ship board weapons against their enemies. What made the Bekirr dangerous was a metallic alloy on their personnel armour or ship hulls which was capable of reflecting energy weapons (or at least, phaser beams). This metal was also capable of passing through force fields with little to no resistance. 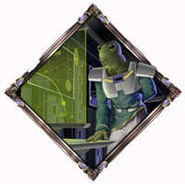 Bekirr
Add a photo to this gallery

Bekirr Battlecruiser
Add a photo to this gallery
Retrieved from "https://cthia.fandom.com/wiki/Bekirr?oldid=155"
Community content is available under CC-BY-SA unless otherwise noted.