The ship has fully integrated ship wide Holographic systems and the quarters have independent holo-enviromental systems. Which allow the crew to select a "Piece of home". The holographic systems throughout the ship, also allows the HRDs, when active to go to any location on the ship to help crew. The Holographic Systems onboard the ship are also able to project and hold the HiHUD (Holographic interface Heads Up Display)which can be found through out the ship.

The Primary power system of of most warp vessels. (Electro-Plasma Distribution Network)

The Auxiliary power generators of a starship. (Plasma can be diverted to a secondary EPS Conduit)

Built by the Aurian species based on Borg technology. Each node is able to produce a high amount of energy. A starship is able to run off APN power alone if all Nodes are running at full power. ( APN Power is connected to all power distribution networks on the ship and can be diverted to every system)

Like most ships, the Main Bridge is the command and control center of a starship. This new bridge is more advanced in several ways, it allows better control of all systems and easier access. Another notable difference is the HCI (Holographic Console Interface), It uses a Holographic interface which allows it to replace the standard Viewscreens and consoles in many areas where space is not available. Directly forward of the command area is the Flight Control and Operations Management stations. Facing the main view screen, the Flight Control console, also known as Helm or Conn, is responsible for both piloting the ship at sub-light speeds and plotting a ship's course with the assistance of the navigational computer. Due the nature of the Helm station, while the ship is not docked at a star base or space station, this station is manned at all times. To the left side of the Flight Officer, is the Operations manager's console, also simply known as Ops. The Operations Officer is responsible for sensor control, communications, and liaison to engineering and the operations center, allocating computer resources, and dispatching maintenance teams. Due to the amount of sensitive controls and information that can be obtained, access to the station is restricted. Furthermore, this station is manned at all times, even while the ship is in drydock, space dock, or docked at a space station. At the very front of the bridge is a large view screen. This main viewer performs all the standard duties expected of it while active. Directly behind the command chairs is a large cutaway display of the starboard profile of the Soval Class starship called, the Primary Situation Display. Capable of showing the status of all ship systems, turbolift traffic, hull breaches, system status, EPS conduits, and all relative ship information. This console can also be used for limited engineering functions.

Located on Deck 15 of the primary hull, Main Engineering houses the warp core and the primary engineering support systems that span two levels. On the lower level, Main Engineering is lined with several Engineering workstations that are used for diagnostics to damage repair dispatch. Directly to port of the warp core is the Chief Engineer's Office. Inside the office, the Chief has a direct line of sight with the warp core and several status displays that show every key system on the ship, from the impulse fusion reactors to the ship's deuterium supply levels. Directly starboard and mirroring the design of the office is an open work area for simulations, Engineering related projects, report writing, and situation analysis.

Along with Security officers it has an I.D.S (Internal Defense System) which is a phaser platform placed through out the ship, this version is able to fire both pulse and beam phasers depending on the needs of the moment, compared to the original version that was only a small pulse.

Additional holographic emitters are located throughout the ship. They are able to project the HRDs and other objects. The emitters in the crew quarters are nearly as powerful as the Holodecks/holosuite emitters. Along with the localized environmental controls, the occupant is able to recreate nearly any environment. These make long term travel easier on the crew and improves performance and maximizes efficiency.

A brig or holding cells are a types of a prison on board a starship. These are heavily-guarded rooms that employ either gates or force fields to keep those incarcerated segregated from the general population of the vessel. These areas are used to contain criminals, fugitives, and others who pose a security risk and must be detained. They are also used as a means of punishment within the ranks. In cases of long term containment, the crewmen or other detainee can be relocated to the smallest quarters on the ship located in the lowest decks; these rooms have a bed, a small table and sonic shower. Meals are delivered to the rooms if occupied.

The crew's medical care facilities are located on Deck 05 and 15. These Sickbays are capable of treating any known disease or performing any surgery that is required. The Deck 5 facility is the largest on the ship and is known as Med-deck as the whole deck is based on medical care and research. Further Medical services, such as the ship's biological research labs, dental care, Intensive Care Units, Radiation Treatment, Null-Gravity care and recovery suites are also found on Deck 05 near Sickbay.

VCC Soval Dorsal Bow.
Add a photo to this gallery 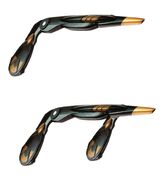